Thank you.
A RingCentral sales advisor will contact you within 24 hours. 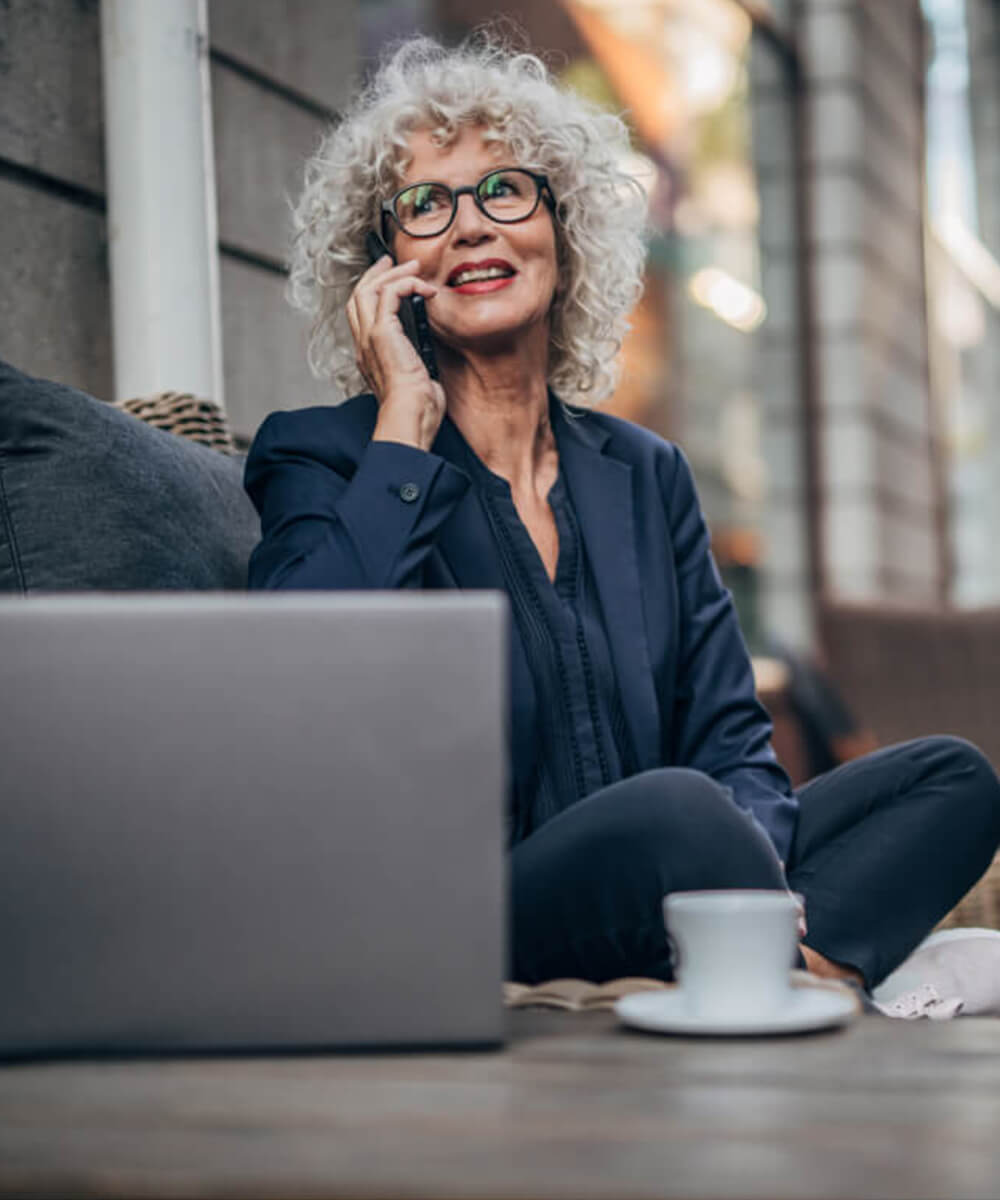 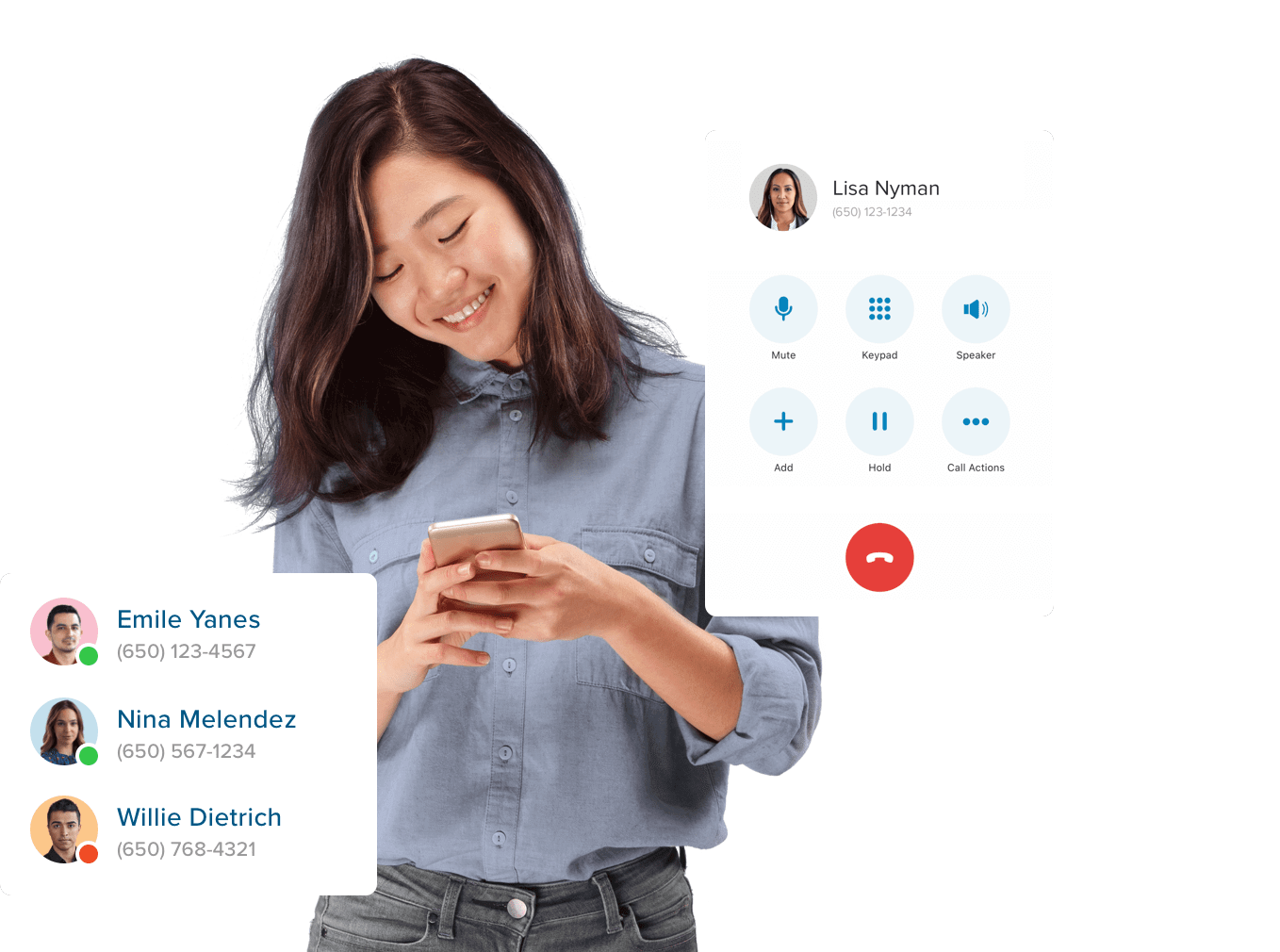 What does VoIP mean?

Due to VoIP’s ability to use IP networks to facilitate phone calls, it’s considered to be a more flexible and mobile option than traditional landlines. After all, this technology makes it so that you can technically make or receive a call from anywhere as long as you are connected to the internet. That’s something you simply cannot do with traditional telephones.

How does VoIP work?

VoIP works differently depending on what it’s connecting calls to—it can connect to other VoIP lines or through traditional landlines. 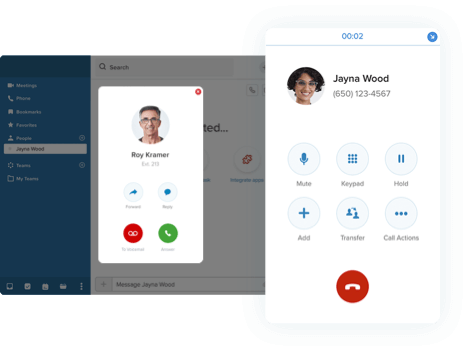 This is how VoIP to VoIP works in simple terms: When you make a call, the audio data is encapsulated or compressed into small data packets. These packets travel through different networks until they reach their destination (the IP phone or computer of the person being called), where the packets are “unpacked” back into audio form. This goes back and forth in real time.

You may recognize a basic form of VoIP in some popular consumer voice apps like Skype and WhatsApp. Through VoIP, people can call each other without a landline telephone. 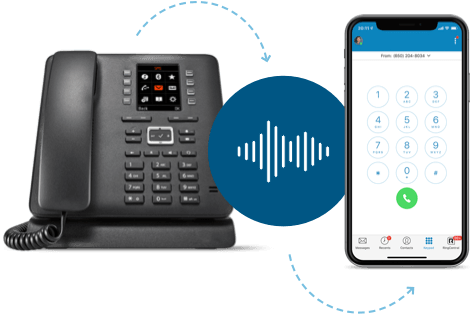 VoIP to PSTN (and vice-versa)

You may be wondering how VoIP can connect to traditional landlines that still use the Public Switched Telephone Network (PSTN).

When you make a call through IP to a landline, the digital audio goes through the same process as a VoIP-to-VoIP call. The difference is that the unencapsulated audio data passes through what’s called a VoIP gateway, which in turn converts digital audio to analog.

On the flipside, an analog call from a traditional landline to an IP network is converted into its digital form when it passes through the VoIP gateway. From there, it can start to work like a VoIP-to-VoIP call.

How do you make a VoIP phone call?

There are several ways to make a phone call using VoIP including:

Don’t let the way they look fool you. These standard desk phones may look like high-tech landline telephone units, but they’re more than that. They are actually small computers connected to the internet through Wi-Fi or Ethernet cables designed to make voice calls while mimicking the functionality of a standard landline. There are many variations of this device, including desk IP phones, starfish conference phones, cordless phones, and more. While the most popular brands are Cisco and Polycom, there are other brands businesses can choose from.

Softphone through desktop or mobile apps

Don’t have special hardware for using VoIP? No problem! There are softphone options you can explore.

Can I use VoIP with a laptop?

One of the best things about VoIP is that it can be accessed through your desktop or laptop computers. All you need is special software, which is usually given by VoIP providers to their subscribers for free, plus a computer mic and speakers (or even better, headphones). With those on hand, you can use your laptop or desktop computer as your telephone.

How does VoIP work with cell phones?

Instead of using your cell plan minutes, you can use VoIP to make calls instead. You can even use your business phone number through your mobile phone to make the call more professional. To do this, simply use the special mobile app your VoIP provider gives you.

One of the first questions businesses ask when shifting to VoIP is “can I use normal landline phones with VoIP?” The answer is “not really.” These phones are designed to connect to PSTN and not to IP networks.

It’s possible for you to get an analog-to-digital converter that turns your regular landline’s analog signal digital, giving it the ability to undergo VoIP transmission with the use of an Analog Telephone Adapter (ATA). But this is not very convenient or reliable, so it’s better to go with an IP phone or use a softphone for VoIP calling.

Don’t let the way they look fool you. These standard desk phones may look like high-tech landline telephone units, but they’re more than that. They are actually small computers connected to the internet through Wi-Fi or Ethernet cables designed to make voice calls while mimicking the functionality of a standard landline. There are many variations of this device, including desk IP phones, starfish conference phones, cordless phones, and more. While the most popular brands are Cisco and Polycom, there are other brands businesses can choose from.

How is VoIP used in business?

For a long time, traditional telecom carriers have been the dominant providers of business communications. Even with the existence of VoIP, regular PSTN lines were considered more reliable and better in terms of call quality. And they had good reasons for thinking that way. After all, VoIP is dependent on the quality of internet connection—and if you remember, in the past, the internet was not as reliable and as stable as it is today.

Fast forward to the early 2000s, where broadband and fiber internet became more stable, suddenly, VoIP is more viable than it was before. Over the years, the technology has also improved to the point that it is no longer just a cheaper alternative to traditional telephony but an actual better option for voice calls. It was not long until the application of VoIP for business use became widespread.

Soon enough, businesses recognized the benefits of VoIP to their operations including:

Aside from offering it as a phone service, VoIP providers also leverage the technology to deliver other communication solutions like video conferencing, business SMS, and online faxing.

What is a VoIP phone system? 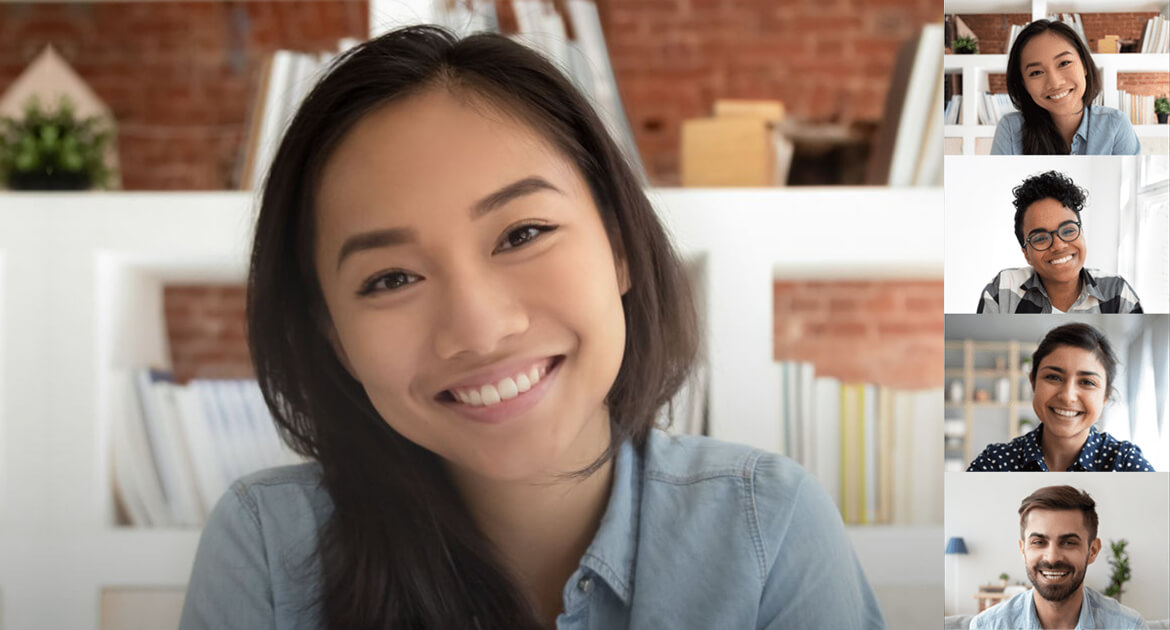 With VoIP as the foundation, businesses found that virtual telephony is a far more promising option for agile organizations, especially when combined with cloud technology.

Fast forward to the early 2000s, where broadband and fiber internet became more stable, suddenly, VoIP is more viable than it was before. Over the years, the technology has also improved to the point that it is no longer just a cheaper alternative to traditional telephony but an actual better option for voice calls. It was not long until the application of VoIP for business use became widespread.

While VoIP is responsible for basic phone functions, most VoIP providers add PBX capabilities to the equation in order to provide businesses with a system that can manage all their incoming calls. This solution is commonly referred to as VoIP phone systems.

In the past, only large enterprises were able to leverage this. This was because it required large servers to host the PBX routing functionality. However, with the rise of cloud technology, everything has changed.

These remote data centers allow them to offer VoIP with cloud PBX functionalities on a subscription basis, making it a viable solution for small- and medium-sized businesses.

Do I need a VoIP service provider?

Most small- and medium-sized businesses believe that they do not need a professional business phone system. More often than not, they think their operations are too small for such an investment.

However, a professional VoIP phone system might just be what they need to take their business to the next level.

By getting a VoIP phone system, your business gets the following:

An auto attendant that promptly answers all phone calls and routes them to the right person or department (no more missed calls!)

Advanced communications features that can increase efficiency and productivity

So yes, you need a VoIP service provider. Just be careful and make sure that you are choosing the right VoIP provider for your business.

Important details and disclaimers
Get Connected Promotion:
20% Office + Phone Rental discount for SMB’s
*Void where prohibited. The Offer is valid between March 1, 2021 and August 31, 2021. To qualify for SMB Get Connected promotional offer (“Offer”) you must: purchase a two-year RingCentral MVP plan of any tier; (2) between two and three hundred ninety-nine digital lines; (3) be located in the US and Canada only ; and (4) be 18 years of age or older; when purchasing the RingCentral MVP plan (the “Qualifying Conditions”). The Offer includes: (1) a 20% discount off the standard list price of qualifying any RingCentral MVP plans for remainder of two-year plan; and (2) the option of phone rentals “Qualifying Phone Models” (defined below) for a 40% off the standard list prices offered by RingCentral. Qualifying Phone Models are limited to the following: Poly 150 or 250 or Yealink T42S orT48S, subject to availability and RingCentral’s sole discretion. Promotional price discount applies to base monthly rate only and excludes fees, taxes, additional or premium services and other charges. These terms are subject to change at any time without prior notice. You agree that the final discount Offer price is determined by RingCentral’s sole discretion, in compliance with these terms and any applicable laws. RingCentral reserves right to terminate this offer at any time. RingCentral Terms of Service apply. Early termination or other changes to the customer’s RingCentral MVP plan, may be subject to additional fees, subject to the Qualifying Conditions.
RingCentral Office is now RingCentral MVP. All references to "RingCentral Office," whether in the Agreement or its attachments, Order Forms, marketing or descriptions, mean "RingCentral MVP"