The modern workweek is a relatively recent innovation. In the 1890s industrial employees often had to work 100-hours in a week. Most worked six days a week. The shift towards an 8-hour day workweek was meant to improve the lives of employees. Indeed, the 40-hour working week is now standard for many businesses around the world. Its adoption is an attempt to prevent excessive working and reduce unfair employer demands.

However, times are changing. A 4-day week is being tried by companies across a range of industries. In this guide, we’ll evaluate some of the pros and cons of a 4-day week. Before we go into that though, I’ll briefly look at the history of the 40-hour 9-5 working week most of us do.

The breakthrough of the 40-hour week

The change in the working week, from 100-hours in a factory to the modern 40-hour week is in part the result of American industry and mechanisation. Ford Motor was one of the first companies to change its workweek policy without changing employees’ wages.

With a successful product and over 50.000 employees, Henry Ford decided to implement shorter workdays.

As Henry Ford said in an interview in 1926, “Leisure is an indispensable ingredient in a growing consumer market because working people need to have enough free time to find uses for consumer products, including automobiles.”

The reason for Ford’s change was both practical and economical. If his employees didn’t have time to enjoy life, then they wouldn’t enjoy and find a use for the cars they were producing.

The move towards a 40-hour week gave his employees more personal time. As a result, their employees were happier, worked less but earned the same or better than other companies.

This shift revolutionised the way companies operated. Other firms were forced to offer similar employment packages to compete with the Ford Motor Company.

Employees in specific fields are now more productive in the same number of hours. However, many are forced to work longer hours, sacrificing family time, and overworking themselves.

Japan, for instance, has some of the longest working hours. The long working hours has resulted in the rise of a new legal term called “karoshi”, i.e., death by overwork. 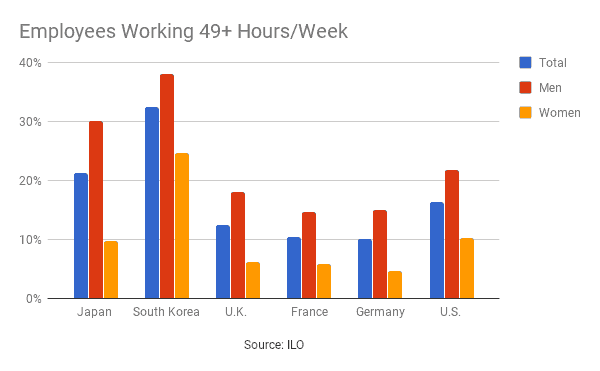 However, alongside the move to longer work hours, there has been a concurrent push for a shorter four day work week. In the section below, we will take a look at some of the pros and cons of a four-day workweek

What does the new 4-day week entail?

A four-day week centres around the idea that a workplace will have its employees attend work for four days a week instead of the customary five.

As of yet, there is no standard model for the four-day workweek. Generally, companies are currently doing one of the following:

This 4-day week idea has come about against a backdrop of historically low rates of unemployment. The underlying idea behind the strategy is to attract the best employees by offering them a chance to get a better work-life balance.

The new work regime offers an attractive hypothesis: if employees work less and have a 3-day weekend, they will be more productive and happier. This will make them more eager to work since they will have found the time to invest in themselves.

The Pros of a 4-Day Week

Personal growth is something a lot of employees tend to sacrifice as a result of working hard. A willingness to sacrifice personal time for work is something many young employees are willing to do to reach success faster. As a result, working can become a way of life rather than a means to live.

A 4-day workweek is unlikely to benefit a person who wants to work overtime to achieve their professional goals. However, as people get older, and start to raise a family, their priorities change. They want to spend more time with family and friends.

In this case, a 3-day weekend will offer them the chance to leave this mindset behind and focus more on themselves.

With extra free time on their hands, employees can focus on improving their management skills or learning something new that will benefit them and the company. Or, they could just relax and come back to work positive and recharged. A motivated workforce will help a company achieve success.

So, when you equip a business with happy employees who are well-rested and satisfied, a company’s team is more likely to succeed.

One of the negatives of working long hours includes stress and bad eating habits. The challenging environment makes it more likely that employees who have no time to recharge end up physically and emotionally exhausted.

With a 4-day week, employees have one extra day to take the burden of working off their chest. A four-day week gives a person time to decompress, and enjoy the weekend with their friends and family.

A New Zealand firm, Perpetual Guardian, tested this hypothesis. They tested the four-day working week with their employees. They reduced the number of working hours for employees, but the wages remained unchanged. The experiment was such a success that the company planned to make the 4-day week a permanent fixture of the company culture.

Perpetual Guardian’s 240 employees reported that during their extra day off they focused on spending time exercising, cooking their own meals, and engaging with housework. The CEO and founder of the company noticed that despite the shorter working hours, there was no dip in productivity.

Having well-rested and happy employees can increase their overall work engagement and productivity.

Wildbit, a company based in the US, a portion of whose workforce works remotely, tested the 4-day week to see whether the shorter working hours will affect employee productivity.

What started as a summer experiment led to the extension of the 32-hour workweek for two more years. They found that despite fewer working hours, productivity was mostly unaffected.

According to Wildbit’s CEO and founder, the company was able to do more with fewer working hours. As weird as that may sound, Wildbit’s employs felt empowered to get things done. They found new ways to be smarter with their time and felt in complete control of their schedule.

The four-day work week experiment showed the company that they could trust their employees to deliver on the work. Being flexible regarding working hours was not a hindrance to the company. Employees understood that just because you are working fewer hours doesn’t mean you didn’t have the same number of tasks to get through.

For many countries, unemployment rises due to the existence of a large equally qualified workforce and a smaller number of available positions. Fundamentally the four day work week will not solve this problem if companies pay workers the same wage for a reduced number of days of work.

In 2000, for instance, France passed a new law that established a thirty-five-hour working week. With a series of arrangements, France gave its employees extra days off, shorter working hours and 4-day week. After the implementation of the reform, the government was credited with lowering unemployment.

According to Anders Hayden, “France’s unemployment rate fell from 12.2 percent in 1997, when the 35-hour week was announced, to an eighteen-year low of 8.6 percent in the spring of 2001, before rising back up above 9 percent by the time the laws were first amended.”

While lowering unemployment is a process that requires careful planning and cooperation between governments and companies, establishing a policy that will offer new job positions can be the first step to stop one of the greatest problems in history.

However, if a company decides to offer employees a 4-day week at a reduced rate of pay, it does provide the opportunity to hire unemployed people and part-timers. Such an initiative would create new positions in a company to cover the job of regular employees. Of course, whether people would be happy to accept a lower wage for fewer hours is another discussion altogether.

The Cons of a 4-Day Week

1. Requires time and effort to adapt to the new working reality

Change can affect us negatively, no matter how hard we try to push ourselves to adapt. After all, not everyone can be as adaptable as the person next to them.

While changes such as moving out or finding a new job can be stressful enough, changes in the work environment can create problems for employees.

For example, shorter working hours might stress employees who have strict deadlines. While the 4-day week aims at making working smarter, more efficient, and less stressful, taking the 5-day week away from the employees might create additional pressures.

Let’s take a person who is working in the highly competitive world of marketing. The pressure of coming up with a marketing plan can be immense. This is where offering employees the choice to work a four or five day week becomes essential.

While the implementation of a 4-day week can improve both employees and companies, certain limitations make its establishment difficult.

One of these disadvantages is that as beneficial as shorter working weeks might be; it won’t work for every industry.

Businesses like security companies and call centres for companies that offer critical services will have problems fulfilling customer promises using a 4-day workweek. This could lead to consumer dissatisfaction and frustration.

In much the same way, managing work for clients that work a five day week, when your company is operating on a four-day workweek, could be a source of problems. While firms and their employees will of course adapt, in a competitive industry, some clients might prefer to work with a company that is available during the same working hours as their staff.

Since bills have to be paid, the food needs to be bought, and children need to be taken care of, working overtime has become a necessity for some people. These people need extra pay to survive.

The transition from a 50-hour week to a 40-hour week can be a difficult task for people used to working extra hours to add to their monthly salary. What’s more, workaholism affects a large number of the general population. Changing these employees’ working habits might cause more problems for them.

According to workaholic statistics, in 2017, US employees counted an average of 137 more hours per year than their Japanese counterparts who created the term “karoshi.”

There is the danger that cutting down from a 5-day week to a 4-day week might force them to work more. This could extend an average workday to 12 or even 14 hours as a person tries to squeeze the same amount of work into fewer days.

Working has been a part of people’s lives since the beginning of human history. Through work, we achieve our goals, express ourselves, grow, and expand our horizons.

Changes like the 4-day week are meant to turn work from a draining process into a balanced way of life. Through shorter working hours, employees will have more time to focus on themselves, become happier and healthier.

While it is clear that some firms are experimenting with the 4-day work week, there is not yet at least, an industry-wide change. Certainly, jobs that offer employees the chance to work four days a week instead of five are likely to be more appealing for anyone looking to get the right work-life balance.

Now, it’s your turn. What do you think about the implementation of the 4-day week? Let us know in the comments below.

Marilia is a Creative Writer working for email marketing software Moosend. Her passion for writing has made her find new ways to combine the art of Creative Writing with SEO Copywriting. When she’s not writing articles, you’ll find her spending time on her drabbles.