End-to-end encryption: What it is and why it matters 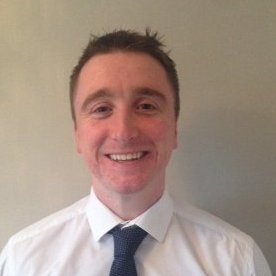 As video conferencing continues to grow in importance for businesses, end-to-end encryption has never been a more critical feature for securing this communication channel. You need to have confidence in your video conferencing and overall collaboration solutions. Are they always available? And are they “securely available”? And are your communications themselves available to you and your teams… and no one else?

End-to-end encryption (E2EE) is the next step in secure communications. But what is E2EE, exactly? How does it secure messaging, video and phone communications? What does it protect against? And who can access these E2EE communications? Let’s find out.

In this article, we’ll cover:

What is end-to-end encryption (E2EE)?

End-to-end encryption (E2EE) is a powerful security and privacy control that ensures your online meeting contents are confidential and secure. E2EE provides privacy for privileged conversations as well as security protection against third-party intrusion and cyber attacks.

How does end-to-end encryption work?

End-to-end encryption (E2EE) technology prevents any unauthorised third party from accessing users’ communications. With E2EE, the endpoints (sender and receiver) are able to establish encryption keys without the involvement of any intermediaries. The endpoints can then use these keys to encrypt (and decrypt) data, as seen in this diagram: 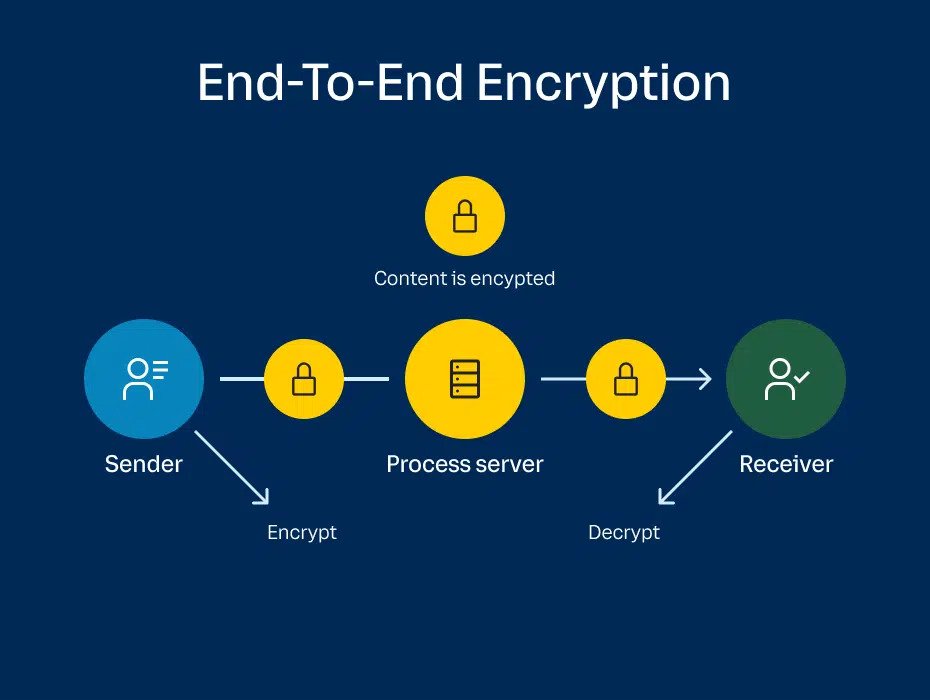 For video meetings where you want total privacy and data security, E2EE adds an extra layer to mitigate risk and shield sensitive information.

As a result, there are two really important benefits that E2EE provides for video conferencing:

With E2EE, if someone tries to modify or tamper with your communications, you will know because they won’t decrypt properly. Looking for a UCaaS provider you can trust? Get the CIO’s Guide to Cloud Communications Security
Download the guide

Encryption of data in transit, over public and private networks, uses industry standard protocols to set up encrypted channels to protect data in transit between two points (known as point-to-point (P2P) encryption).

When used with standard protocols such as TLS, SRTP, even HTTP/S, P2P encrypted channels are established between two systems, such as the application used by the video participants and the video provider’s processing systems. This allows the video provider to provide additional features, such as virtual backgrounds, meeting transcription and closed captioning and chat translation of the decrypted ”in the clear” communications.

With E2EE enabled, RingCentral cannot offer these enhanced experiences but in exchange provides the utmost privacy and security for an organisation’s communications. 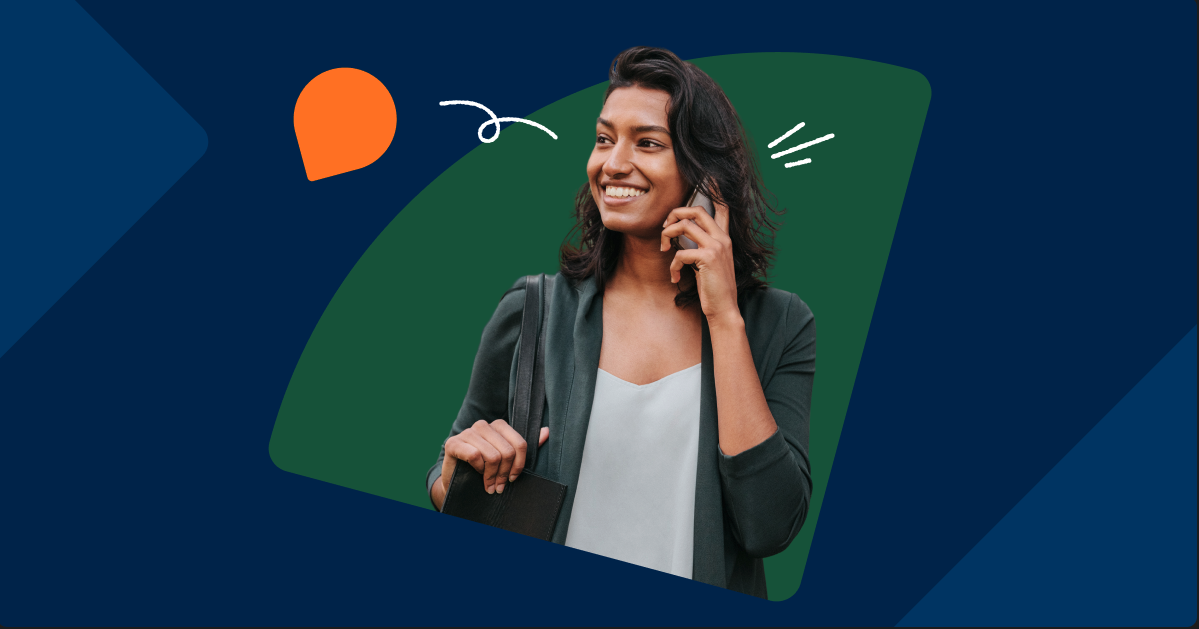 How to choose the right encryption for your business communications

Remember that there are advantages and disadvantages to both end-to-end (E2EE) and point-to-point (P2P) encryption.

With E2EE, you have total confidentiality and peace of mind that your video meeting is fully private, but value-added services such as live transcripts and cloud recording won’t be available.

With P2P or encrypted data-in-transit, you have protection from eavesdroppers while your communications are en route from sender to receiver; explicit provider access allows value-added services including live transcripts/closed captioning, cloud recording and more. If you need to uplift your security, then E2EE is the way to go.

Of course, how you approach each video meeting will be different. For example, a monthly all-hands meeting might benefit from services like closed captioning. A meeting to discuss sensitive financial or legal information, however, requires total privacy and deserves the uplifted security of end-to-end encryption. 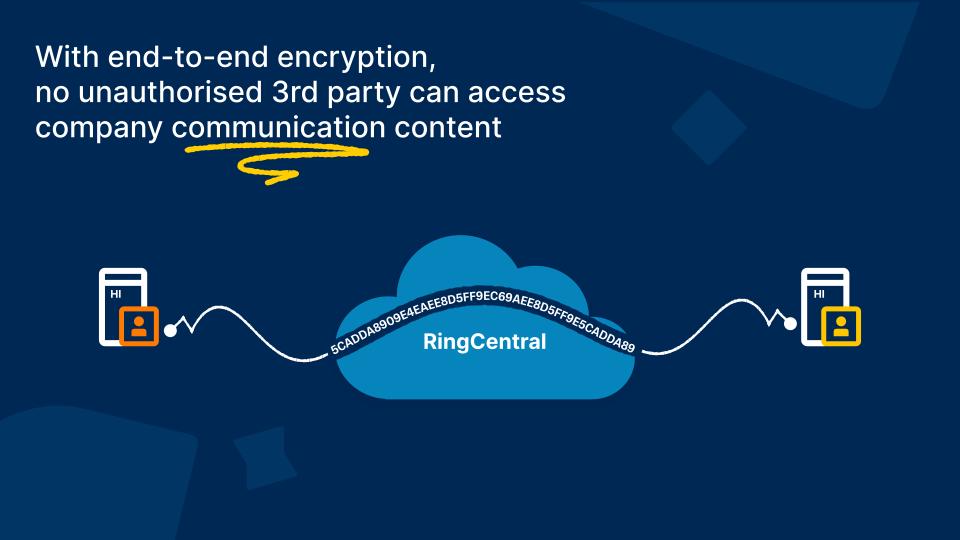 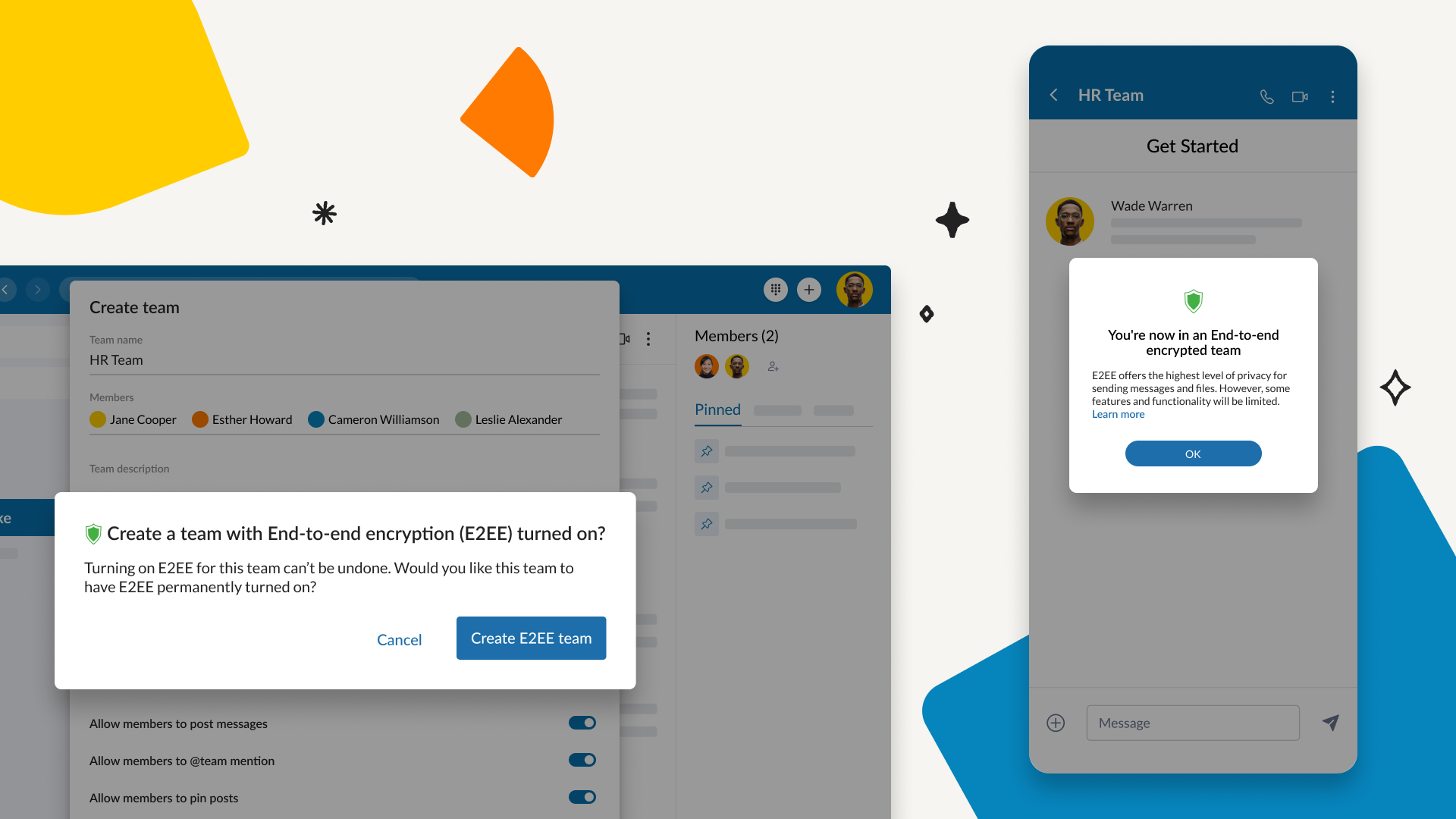 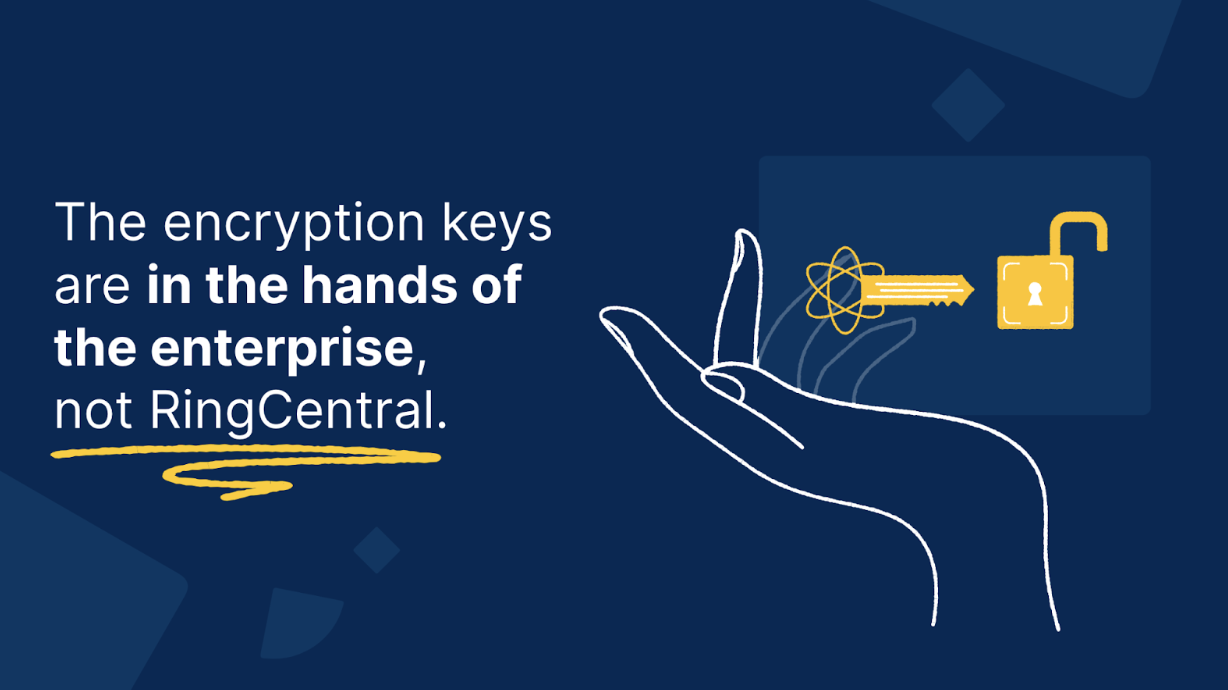 With E2EE cryptography, the private keys are stored on the endpoint devices and E2EE messages can only be decrypted using these keys.

The key management is completely outside of the backend even though it distributed them. The backend works directly with the endpoints for key distribution.

We built our E2EE using Message Layer Security (MLS). MLS is a security layer for encrypting messages in groups of size two to many. It is designed to be efficient, practical and secure. In contrast, other popular consumer and business applications that use E2EE technology use the Signal protocol, which is a non-federated cryptographic protocol that can be used to provide end-to-end encryption for voice calls and instant messaging conversations.

However, Signal-built E2EE solutions are not as scalable when compared to MLS-built ones. As a result, they will have performance issues such as CPU usage, memory issues and lag when going beyond 1:1 conversations – a limitation that does not exist with RingCentral E2EE as a result of using MLS.

Our vision for enterprise-grade E2EE

“With RingCentral’s E2EE for video, and soon, phone calls and messaging, organisations can use RingCentral’s native capabilities to simplify their technology stack with one offering. We believe our approach to end-to-end encryption across message, video and phone is truly differentiated, and represents the most complete deployment of E2EE for enterprise communications, to date,” said Michael Armer, chief information security officer at RingCentral.

“People exchange millions of calls and messages a day on RingCentral’s platform. With our new E2EE, we’re extending enterprise-grade privacy and security controls for our customers, giving them the freedom to have confidential conversations across any mode.”

5 Ways to Prepare For Future Periods of Remote Work 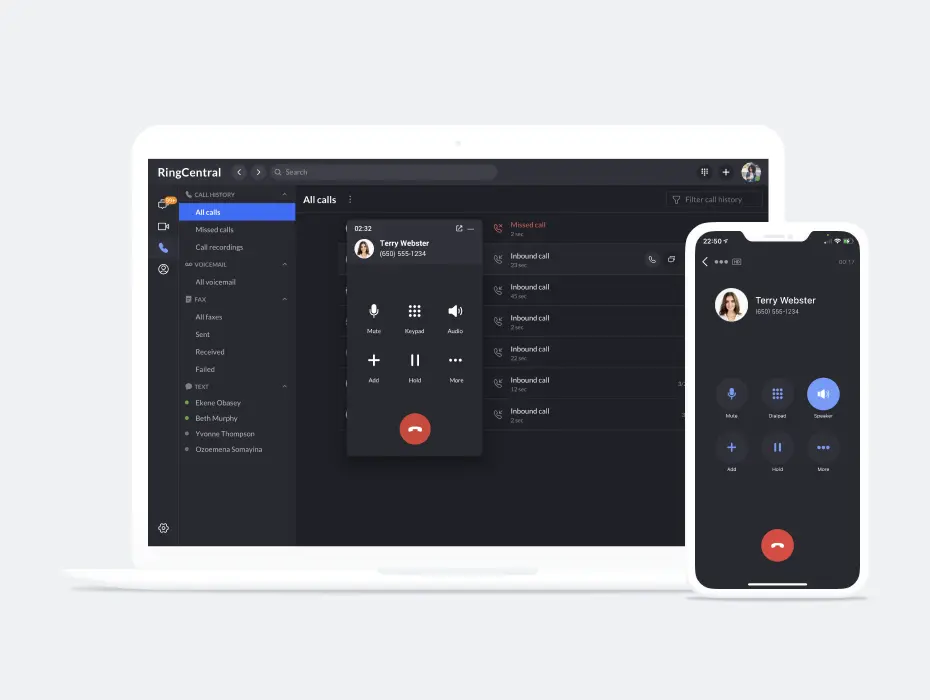 Dark Theme: Better for your eyes and battery 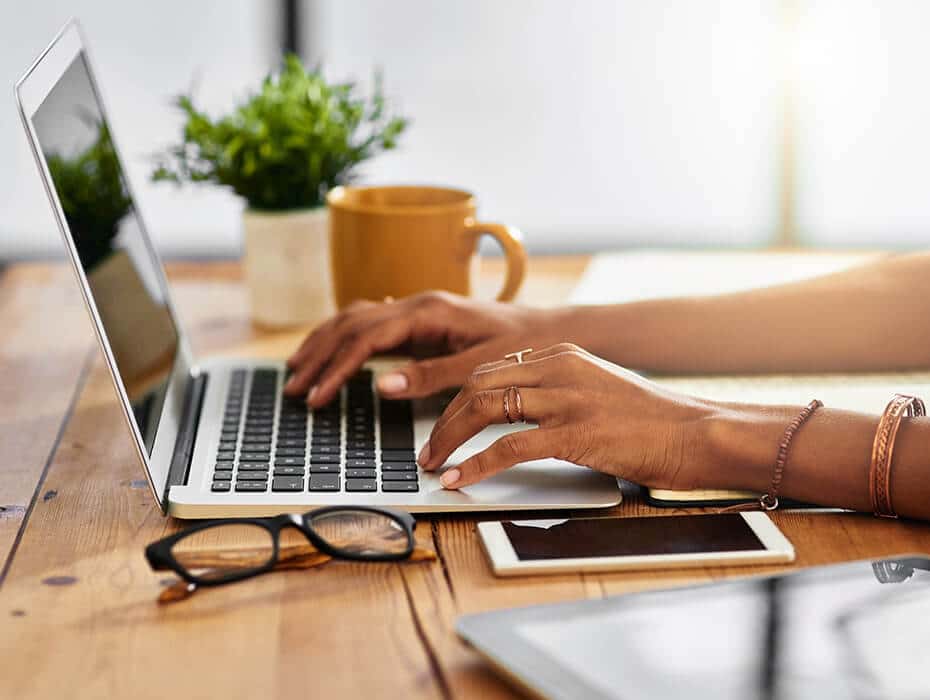