Select the state and area code for your new local number 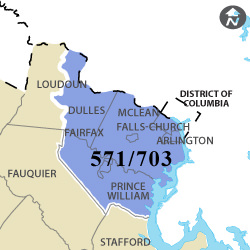 The 703 area code covers the portion of northern Virginia that is closest to Washington, D.C., which is part of the reason why several federal government agencies like the U.S. Department of Defense and the Central Intelligence Agency have headquarters there, specifically in the Arlington County area. As a result, a number of government contractors and several lobbying firms operate in the region and provide further employment opportunities.
Aside from the government presence, Arlington also has a thriving economy based on technology, manufacturing, construction, and wholesale and retail businesses. There are currently more than 17,000 businesses in this region, including several Fortune 500 companies, operating within Arlington County, many of which have headquarters in the area.

Between the high government presence and a strong private sector, Arlington has consistently had one of the lowest unemployment rates in the country, even during the economic downturn in 2008. As a result, BusinessWeek named Arlington County as the safest city to survive a recession for the same year.

There are over 220,000 people in the county; and they are among the most educated in the nation. Because of this, there has been considerable growth in the number of technology firms operating and hiring in the area.

The county is also home to some popular landmarks that attract tourists in the region. This includes the Pentagon, the Arlington National Cemetery, and the Iwo Jima War Memorial.

Other cities that share the same area code include Alexandria and Reston.

Another area code that serves North Virginia is 571, which was created as an overlay to 703.

Sign up with RingCentral for a new 703 area code local number, using the phone number tool above. You can also opt for a toll-free number to create a national presence.